It starts when kids are tiny.

As soon as they enter the Schooling-System… the “telling” begins.  The teacher “tells”, the kids listen and obey.

I sent my kids to pre-school before they were out of nappies.  At the time, I vehemently believed that public schools were best.

“My kids aren’t going to end up strange and sheltered like those homeschooled children!”, I declared.

Morgan stayed at pre-school for 3 and a half years… (and I’m still trying to un-do what was done).

Take art lessons, for example.  In Morgan’s school – even art lessons involved “telling”.  There was no room for creativity, exploration, initiative or invention.  Children were each handed a copied page out of a colouring-in-book – and told to “colour in neatly”.  The children who neatly coloured in their drawings (in all the right colours) were given good marks in art.  The children who scribbled on their pages… or who coloured apples purple (instead of red or green)… were told to “do better next time”.

The spoon-feeding had begun.

What I am asking… is that we just… QUESTION a few things.

At school, we were taught to answer the questions (correctly, of course).  If you answered all the questions, if you ticked all of the right boxes, you got good marks on your standardized test – and you passed.

But this post isn’t going to talk about how school damaged me.  I want to talk about what 3 years of pre-school taught my children – and specifically my daughter (who attended pre-school for about double the length of time that her younger brother attended).

When I took Morgan out of school, she relied (strongly) on me to tell her what to do.

If I handed her a blank sheet of paper with some paints and pens – she’d want to colour-in, instead (by the way, I hate children’s colouring-in-books – they are completely banned from our home)… (with no offence intended to a reader of this blog who gives out free colouring-in sheets to adults in order to assist with inner-healing).

Eventually, Morgan reluctantly agreed to draw (on blank paper) – but she would always ask:  “What must I draw, Mommy?”

Morgan wasn’t sure what to do with that response.  She was used to being told exactly what to do.  At her school, even craft lessons involved perfect squares and circles which children had to glue together according-to-instructions.  Free play (in art)… had never been encouraged at Morgan’s school.  Everything had always been meticulously structured… and done in “steps”… i.e.:

How to Make a Duckling:

(you get the picture)…

The kids weren’t simply allowed to… you know… just draw (or create) their own interpretation of what a duckling might look like.  The children’s versions were deemed messy and “wrong”…  right from the start – and even with ART lessons… there were rules that needed to be obeyed.

Getting Morgan out of that mind-set has been a slow process (and she was only at “school” for 3 and a half years).  When she eventually agreed to draw (instead of colour in) – she would automatically revert to the images that she had previously coloured in (at school)… characters like Mickey or Minnie Mouse…  and she’d get hugely frustrated that her work wasn’t as “neat” or as “nice” as the drawings that she had coloured in before.

My child… at age 5… was already trapped in the “supposed to” mentality.  Ugh!!

It took a lot of encouragement from me to explain to her – that her drawings were beautiful… and that I was glad that they didn’t look like the drawings from the colouring-in-book.

She has come a long way since then.  These days, she eagerly grabs her paints and pens and imagines and invents all kinds of new creatures and creations.  She’s still not as free as her brother (when it comes to art) – and there’s still quite a few rules that she imposes on herself…  (but she has certainly come a long way).

Education that Spoon-Feeds (and kills off creativity)

The other day, I watched a very interesting TED talk by Tony Wagner on the state of education – and one of the quotes given was this:  “The world no longer cares whether you’re smarter than a fifth grader or how well you do at Trivial Pursuit.  The world no longer cares about what you know… but what you can DO with what you know… and that is a completely different education problem”.

And this is such a pity – because creativity (the ability to come up with different ideas and new solutions) is vital in the world in which we now live.  Vital!   We have too many obedient, complaint adults – waiting to be told what to do… and too few creators, initiators and problem-solvers.

Our outdated education system is largely to blame.

Even from a young age… (pre-school, in fact)… kids are taught and told to listen and obey… and that theme of simply listening and obeying remains strong throughout pre-school, primary school, high school… and even university or college.

Now, more than ever (and all over the world) – we have thousands of spoon-fed (and now unemployed) college graduates who are saying:  “Hey?  What’s happening?  I followed The Rules!  I did as I was told!  Where’s my good job?  Where’s my happily ever after?”.

Don’t believe me?  Read this excellent blog post (actually a letter to his granddaughter) written by John Taylor Gatto, author of “Dumbing us Down”.

And… apart from all the stuff that college graduates now KNOW… the question remains: “Yes, but what can you actually DO?”

And – many of them… sadly… won’t know how to answer that question.  Because they’re still passively waiting for someone out there to “TELL” them what to do.

World-wide, experts like Sir Ken Robinson, Tony Wagner, John Taylor Gatto (and many others) – are saying that the current “system” of education is obsolete – and that everything needs to change.  But the process is SLOW.  The current Education System is like a massive, rusted, iron ship – headed off in the only direction it knows.  Educational reformers are like tiny tug boats… pulling at the sides of the hull… trying to set it on a different course – but reformation takes time and the process is painfully slow.

I believe that there are a number of things that we, as parents, can do – to encourage creativity, questioning, problem-solving capabilities and forward-thinking initiative in our children (so that they’ll thrive not ‘because’ of school – but, in spite of it).

And… ONE of those things… is to encourage kids to start their own little business!

Yes – even at a young and tiny age!

Starting a little business or a little enterprise will get kid’s creative juices flowing and there are so many additional skills that they can learn.

Obviously I’m not advocating child labour (or long hours spent on “business” when they should be playing and having fun)…  I’m talking about a tiny little part-time enterprise – like a stall at Kid’s Market… or baking batches of cupcakes for birthday parties… or a lemonade stand… or selling un-used toys on Ebay… or, in the case of this little girl, baking bones and “crunchy poo’s” for pets!

Morgan and Joah have recently started their own little enterprise called Beetle & Bear (their nicknames).  They illustrate the stationery… I get it printed… they package it, label it and sell it. 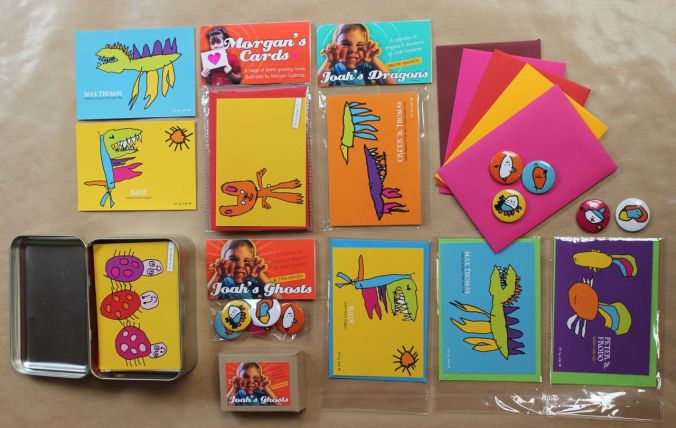 In the process, they learn how to work with money… how to budget (so they can print more cards with their profits)… how to chat with folk of all ages… and soooo much more.

There’s no pressure (at least not on my part).  They don’t *have* to do this long-term.  Morgan and Joah might decide that their involvement in Beetle & Bear is only for a season – they might even move on to other things.  The point is – I want to encourage them to explore and try new things.  I want them to experiment with ideas.  I want them to initiate… create… invent… and problem-solve!

I’m not a helicopter Mom with lofty ideals of entrepreneurial “success” for my kid’s little enterprise.  For the moment, it’s something fun that they do that helps earn them a bit of extra pocket money… (while teaching them a few important life-lessons at the same time).

I know that it’s just a drop in the ocean… and just ONE small way for kids to access the big, wide, beautiful world out there – but, I think, it’s a step in the right direction.  🙂

PS:  Joah posts enjoys posting his own illustrated postcards to friends around the world.  If you’d like to receive a postcard from my almost-5-year-old…  click here.